The N.C. Department of Transportation (NCDOT) and the National Park Service (NPS) today announced the launch of the first self-driving vehicle to be tested at a recreational public lands site in the nation, and quite fittingly, the Connected Autonomous Shuttle Supporting Innovation, or “CASSI,” was launched at the Wright Brothers National Memorial in Kill Devil Hills, the site of the world’s first powered flight.

“This is a huge day for transportation,” Eric Boyette, the state’s Transportation Secretary, said during Tuesday’s launch at the memorial. “We’ve come such a long way since the Wright Brothers made their first historic flight here more than a century ago. Just like that milestone, we think the CASSI represents the start of another revolution for transportation.”

The CASSI will help the NPS and NCDOT learn more about how driverless vehicles can be safely and effectively used in the future. The CASSI will be tested at the Wright Brothers National Memorial for three months.

“Wright Brothers National Memorial is excited about building upon the Wright brothers’ legacy of transportation innovation through this first-of-its-kind shuttle demonstration and through a successful partnership with NCDOT,” said David Hallac, superintendent, National Parks of Eastern North Carolina. “This exploratory initiative will inform the park service’s use of autonomous transportation systems in the future.”

Autonomous vehicles use cutting-edge technology to operate without a driver. However, as part of this pilot, a trained customer service operator will ride in the vehicle to ensure the safety of passengers. The operator will monitor conditions and be able to manually stop the vehicle at any time.

The vehicle will navigate its route using remote sensing laser technology called LiDAR and GPS used to map and then monitor a fixed route. Sensors continuously scan the shuttle’s surroundings and signal for it to stop when an obstacle is too close. The NCDOT is working with TransLoc to provide real-time tracking software and a map to keep riders updated on CASSI’s location on NCDOT’s website.

During the pilot, information will be collected about things such as the number of passengers, trips, and the vehicle’s battery usage. NCDOT and NPS will use the data to better understand how autonomous vehicles perform in different settings.

From today through July 16, the vehicle will take passengers from the Wright Brothers National Memorial museum to the First Flight bronze sculpture and back.

Rides are free. However, the number of passengers is limited due to the size of the vehicle and space limitations due to COVID-19. Passengers will be asked to follow COVID-19 safety protocols during rides, including mask wearing and physical distancing. The vehicle operates at speeds between 8 mph and 12 mph.

The vehicle was originally introduced at the 2020 Transportation Summit in Raleigh and then it was piloted at N.C. State University’s Centennial Campus last spring. More information can be found on NCDOT’s website and the National Park Service’s Wright Brothers National Memorial website. The NCDOT is leasing the vehicle from EasyMile. 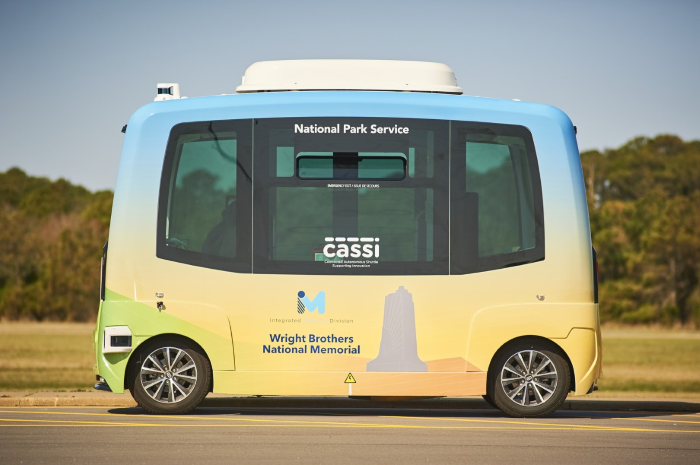