The third and final film in director Peter Jackson’s The Hobbit trilogy culminates in one of biggest battles ever put on screen, a fitting sendoff for a franchise that has contiually upped the ante of fantasy filmmaking since Jackson began his Lord of the Rings trilogy over 10 years ago, and a fond farewell to many of the characters we have grown to love in those years. 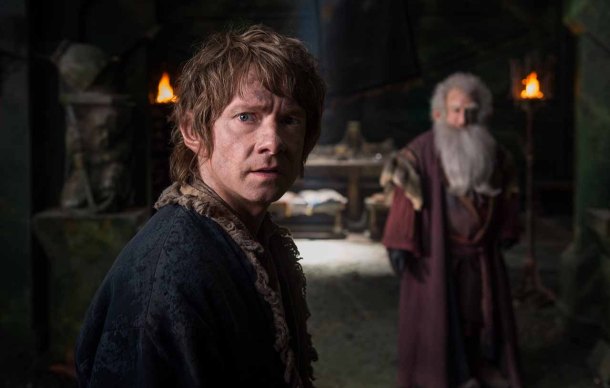 Martin Freeman is Bilbo Baggins in ‘The Hobbit: The Battle of the Five Armies’.

The Battle of the Five Armies picks up exactly where last year’s The Desolation of Smaug left off, with the fire-breathing dragon Smaug laying waste to the small and vulnerable Lake Town, as our titular hero Bilbo, played perfectly again by Martin Freeman (The Hitchhiker’s Guide to the Galaxy) and his dwarf companions look on in horror.

Unfortunately, Smaug is vastly underused in this film, as he was in the last, and I anticipate that I am not the only viewer that was left wanting more of the awesomely menacing dragon.

Much of the story involves Richard Armitage’s dwarf king Thorin Oakenshield becoming obssessed and growing insanely protective if his newly reclaimed treasure hoard of countless riches, gold, and jewels, until it eventually has an effect on him not unlike the evil Ring of Power has over its various carriers (Golum, Bilbo, Frodo) over the prior films.

As it would in real life, the finding of untold riches leads to other interests, like the supermodel elves and the slimy orcs, to send thousands of warriors to claim the treasure for them, as the men of Lake Town must unite with the dwarves in an all-out battle royal of all the armies of Middle-Earth, hence the movie’s title.

Things get ugly in ‘The Hobbit: The Battle of the Five Armies’.

There are some great performances in The Battle of the Five Armies, including Ian McKellen (X-Men) returning for his sixth turn as Gandalf the wise wizard, while many of the dwarf characters, like Aiden Turner’s lovelorn Kili, are rightfully given some much needed time and room to shine even amid the climactic chaos reigning around them.

Representing the elves, Orlando Bloom (Pirates of the Carribbean) gets his requisite badass moment, Evangeline Lily (Lost) supplies a dash a femininity in a mostly male movie as the warrior Tauriel, and Lee Pace (Guardians of the Galaxy) hones his glassy gaze to perfection as elf king Thranduil.

In the end, it’s Freeman’s Bilbo that brings it all together and eventually back home to the hobbit’s Shire, where it all began, where we first met many of these characters (or at least some of their ancestors) in the first Lord of the Rings film in 2001.

While The Battle of the Five Armies and The Hobbit trilogy in general lacks the sheer heartpounding urgency and sweepingly emotional story arch of its Lord of the Rings counterpart, it is nonetheless an entertaining and rousing end to one of the most epic journeys in movie history.

Official Rating:  4 out of 5 Stars

The Hobbit: The Battle of the Five Armies (rated PG13) is now playing at R/C KDH Movies 10 in Kill Devil Hills.