A new trailer for the spin-off of the popular National Geographic Channel (Nat Geo) series Wicked Tuna, filmed on the Outer Banks, has arrived online, along with the official poster and information on the local fishing boats that will be featured!

The three local boats representing “the South” will be the Wahoo, Fishin’ Frenzy, and Doghouse.

Born and raised in the Outer Banks, Captain Reed Meredith (pictured below) and his older brother Banks designed and built the Wahoo back in 2000.

The crew of The Wahoo will be featured on ‘Wicked Tuna: North vs. South’, filmed on the Outer Banks, North Carolina.

The Fishin’ Frenzy is one of North Carolina’s top-earning boats due to the notoriously diligent Captain Greg Mayer (pictured below).

The crew of Fishin’ Frenzy will be featured on ‘Wicked Tuna: North vs. South’, filmed on the Outer Banks, North Carolina.

Captain Britton Shackelford (pictured below) of the Doghouse is a proud Southerner who puts faith and family first. 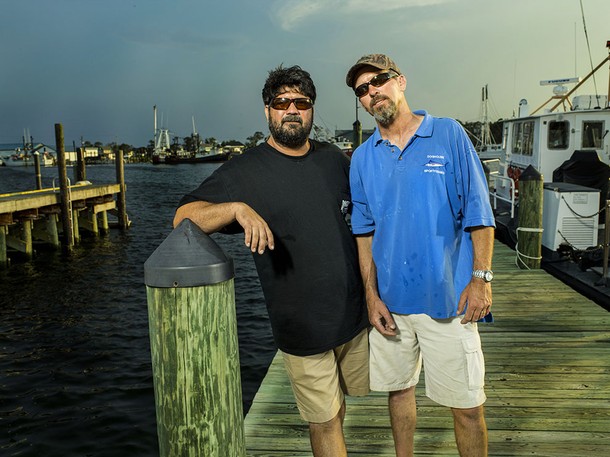 The crew of Doghouse will be featured on ‘Wicked Tuna: North vs. South’, filmed on the Outer Banks, North Carolina.

The original Wicked Tuna follows the cutthroat, high-stakes business of bluefin tuna fishing in Gloucester, Mass., as vessels and crews set sail in search of the smartest, fastest and most elusive fish in the ocean — and the big money that follows them. Although bluefin season came to an end in Gloucester on Dec. 31, it’s just about to get started in the Outer Banks.

Some of the New England captains from the original series ventured south earlier this year to reach the evasive bluefin in the Southern Atlantic waters before their North Carolina counterparts beat them to the catch. The weather is much more unpredictable in the Outer Banks during its January through March bluefin season, and the seas can be extremely rough.

But if the captains can reach this “new frontier” and reel in some “monstah” fish before the government catch quota is reached (the quota was reached in mid-February last year), the winter months could potentially yield a greater catch than in Gloucester. In fishermen’s terms: a cash bonanza.

You can watch the new trailer in the player below, and then scroll down to view the official poster!