Filmed in Wilmington, North Carolina, The Conjuring is easily the scariest movie of the year, hitting all the right notes in an atmospheric tribute to the 1970s golden age of horror.

The film is based on the real life story of the Perron family, who believed that their Rhode Island farm house was haunted by evil spirits and called on a husband-wife team of paranormal investigators, Ed and Lorraine Warren, to help them.

Joey King is terrified by ‘The Conjuring’.

Livingston’s Roger tries to be a good man of the house by bravely exploring the boarded up dusty old cellar (which should have been left boarded up) and urging his wife to have a doctor look at the strange marks appearing mysteriously on her body.

He has just spent the family’s last dime to buy their new farm house, so moving out before they’re even unpacked is not an option, and when his truck driving route takes him out of town for a week, all hell predictably breaks loose while he’s gone.

Taylor is great at playing scared-to-death, which Carolyn (and the audience) is by the time she ventures down into that cellar herself, and her gradual mental breakdown thanks to the family’s supernatural tormentors is believable and fittingly disturbing. 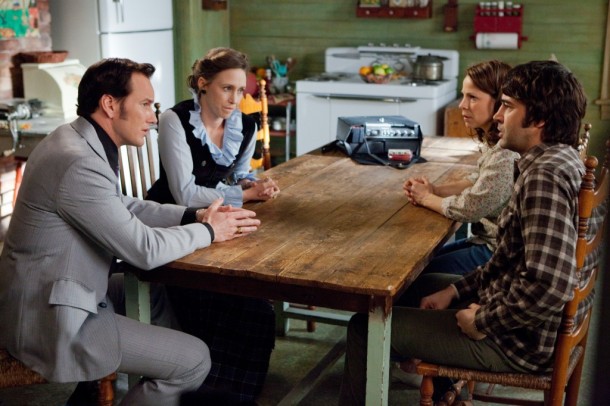 Patrick Wilson (Watchmen) and Vera Farmiga (Bates Motel) are the Warrens, the real no-nonsense ghostbusters who usually disprove suspected hauntings and possessions rather than confirm them, but find themselves up against something they’ve never faced at the Perrons’ home.

Farmiga’s Lorraine Warren is the heart of the movie, convincing her husband to help the Perrons, even though she had a scary emotional experience at their last exorcism date together. She sees dead people and evil spirits everywhere, and while we are wisely kept in the dark about most of what she’s seeing, we do get to watch the terror play out on her face.

Wilson’s Ed is much more direct and up front than Lorraine whether dealing with a new case or a new entity, while both the Warrens are played deadly serious throughout the film, as clearly none of this is a game to them. 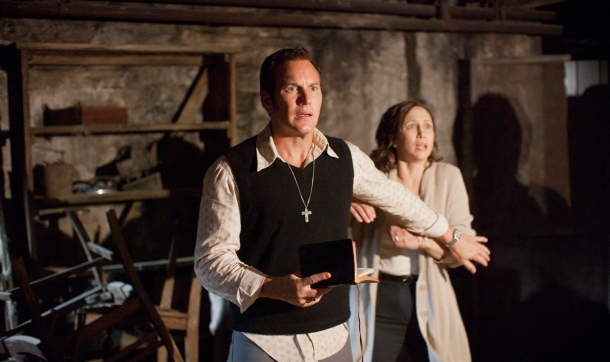 Patrick Wilson and Vera Farmiga get spooked in ‘The Conjuring’.

I can only recall one brief moment of comedic levity in the entire movie, leaving you at times gasping for air and a break from the mostly unseen terrors that begin to arrive with increasing intensity each night, as the film falls into a soon familiar rhythm not unlike Paranormal Activity.

The atmosphere of fear is so thick that even during the few lighthearted scenes, you are constantly looking for something else happening somewhere in the frame just outside of the characters’ view.

The Conjuring is not about the monster before your eyes, but the one that’s right in front of you yet just out of sight, like the dark figure that may or may not be lurking in the shadowy corner behind the bedroom door in one of The Conjuring‘s most frightening sequences.

‘The Conjuring’ was filmed in Wilmington, North Carolina.

I especially loved how the walls and doors of the Perrons newly bought home had the decades-old stains of general use familiar to anyone who’s been in a house built a hundred or more years ago, and of course the trippy ’70s-style wallpaper and floral designs, suggesting the same foreboding dread found in classics like Stanley Kubrik’s The Shining and Roman Polanski’s Rosemary’s Baby.

Any “big reveals” at the end of the film will undoubtedly haunt viewers far less than the spooky teases that effectively color The Conjuring throughout most of its running time.

The best scares are the kind that get under your skin and play with your childhood fears. It’s not that we haven’t seen similar scenes, but rather it’s how Wan pulls off an age old haunted house story with a fresh energy as if it’s never been done before.

To say that this film begs for a sequel does a great disservice to Ed and Lorraine Warren, as it is their extraordinary real lives that actually beg – and I’d say deserve – to be a series.

While the final moments of the climax tread a little too close to Linda Blair-Exorcist territory and the resolution feels a bit too conveniently rushed, The Conjuring possessed me enough that I can’t wait to go on the next ghost hunting adventure with the Warrens, the new superheroes of horror.