[UPDATED 10/26/12: Due to Hurricane Sandy, the Ocracoke/Hatteras Pirate Jamboree has been cancelled for this weekend, and is tentatively rescheduled for next weekend, Nov. 2-3.]

The 2012 Blackbeard’s Pirate Jamboree is set for October 26-27, with events scheduled on both days in Ocracoke and Hatteras Village.

The Pirate Jamboree is an annual cross-island event that celebrates the maritime history of Ocracoke and Hatteras Islands. This two-day event is highlighted by an all-day family friendly pirate encampment by Blackbeard’s Pirate Crew on Saturday, Oct. 27.

You can help welcome the pirates to the islands on Friday, Oct. 26 from 4 to 8pm, with a lively family-fun-filled welcome party at the Affairs at Austin Creek venue at Hatteras Landing. Among the evening’s highlights will be a scavenger hunt, a costume contest, roaming mistrels, yummy food and plenty o’ grog.

The main event unfolds on Ocracoke Island on Saturday, Oct. 27 starting at 10am, as Blackbeard’s Pirate Crew joins the Devilmen of Cape Feare, who will arrive in Ocracoke in their 27-foot open boat, and Captain Horatio Sinbad with his pirate boat, the Meeka II.

A scavenger hunt through Ocracoke businesses is also being planned.

While the Ocracoke Community Square will host plenty of vendors and goodies, the main pirate encampment will be located at 161 Irvin Garrish Highway in Ocracoke, with the Park Service restrooms nearby for convenient parking.

All events are free and open to the public. 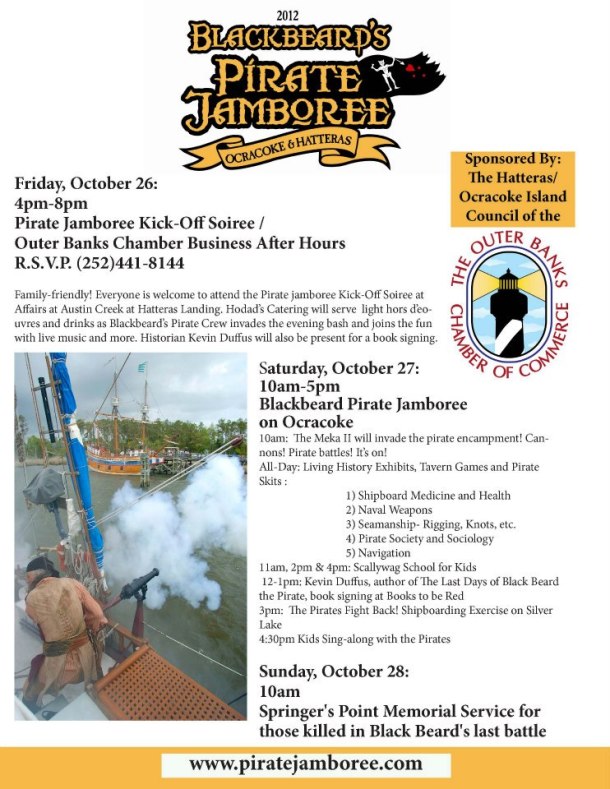