On Wednesday, December 17, 2014, the First Flight Society and the National Park Service will continue the tradition of honoring the accomplishments of Wilbur and Orville Wright at the 111th anniversary celebration of the first heavier-than-air powered flight.

The event takes place at the Wright Brothers National Memorial Visitor Center in Kill Devil Hills, and park entrance fees will be waived for the day.

Read on for the full schedule of events!

• 9:00 a.m. – 10:00 a.m.: Observance begins with a patriotic musical prelude by the Northeastern High School Band from Elizabeth City, NC, and a meet and greet with members of the Wright family.

• 10:00 a.m. – 10:30 a.m.: The wreath-laying ceremony takes place on the exact spot where the famous first flight occurred. During this event, the Wright brothers and the witnesses of the first flight will be honored by the National Park Service, members of the First Flight Society, and the descendants of the witnesses.

Throughout the day, the park’s museum exhibits and activities provide an atmosphere of enjoyable learning about one of the greatest inventions of the 20th century.

Children are invited to participate in the park’s Junior Ranger program.

For more information about the event, call Wright Brothers National Memorial at (252) 475-9401. 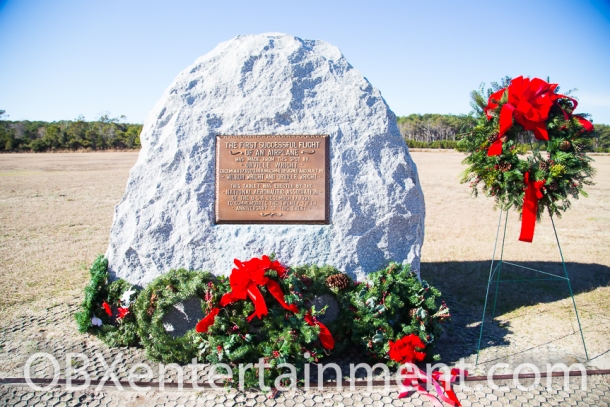