OBXentertainment.com is excited to announce that Kitty Hawk Kites has graciously donated approximately $500 in prizes to be awarded to the winners in the various categories of our Costume Contest at the first annual OUTER BANKS HALLOWEEN PARADE OF COSTUMES, a free family-friendly event for kids and adults of all ages, coming to Kelly’s in Nags Head on Sunday, October 26, 2014!

Kitty Hawk Kites has donated some great prizes for each category, including: 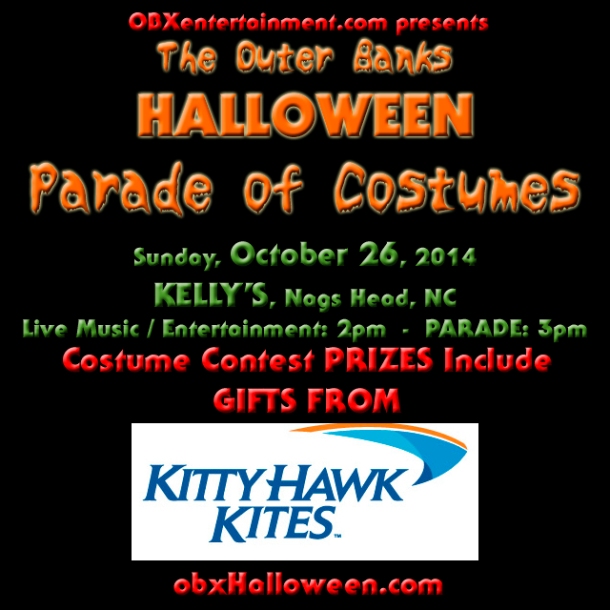 Everyone who registers to walk in the Parade will be entered into the Costume Contest, with the winners to be announced during an Awards Ceremony immediately following the Parade.

Special guests coming to the event include Queen Elsa from the Disney movie Frozen and horror icon Michael Myers from the movie Halloween, who will both be available for autographs and photos starting at 2pm, prior to the Parade.

The Parade will begin at 3pm, with registration , live music by Jonny Waters, trick or treat stations, and entertainment starting at 2pm at Kelly’s Outer Banks Restaurant and Tavern in Nags Head, North Carolina.

Food and beverages will be available for sale inside Kelly’s, as well as professional portraits, starting at 2pm, plus NFL football on TV and a real life “Haunted Hearse” on site for spooky Halloween-themed photos with families and friends in costume. Professional jet pack pilot Butch Stone will also have his OBXjetpak on display for you to try on and get a photo with.

Admission to this rain or shine event is free for anyone wearing a Halloween costume.

Watch and share the Parade promo video in the player below!