On Sunday, August 17th, the backyard of the Outer Banks Brewing Station transformed into a field-day for children and adults of all ages as they joined together to celebrate the end of summer and the kickoff to the new school year. Students participating in the Outer Banks’ Mustang Outreach Program hit the stage along with local musicians, and program mentors, Soul House Revival. 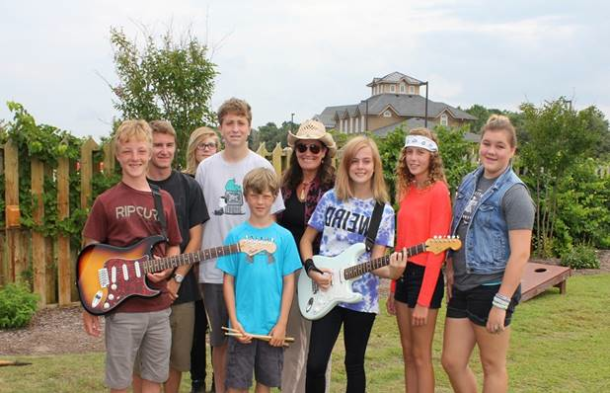 Following participation in a series of summer music camps focusing on the improvement of technical musical skills and songwriting, these students wrote their own original music and formed two bands.

The crowd enjoyed performances by “The Unknowns,” “Vertigo,” as well as a guest performance from local teen, and Community Music School student, Joel Everett.

These musicians are all working hard towards a performance on the main stages of the Mustang Music Festival this October where they will share the stage with major, award-winning, national recording artists. Some students will even earn the opportunity to perform inside the Historic Whalehead in Corolla for an intimate, once-in-a-lifetime, set.

“The Unknowns” signing their first autographs.

The MOP’s Back-to-School was sponsored by the Mustang Music Festival and produced by Community Music School supporters, Majestic Productions.

Patrons were treated not only to a wide array of musical selections, but they were also graced with the presence of Freedom, a gentled Spanish Colonial Mustang, who arrived in style with the Corolla Wild Horse Fund (the Festival’s beneficiary).

Festival directors also brought out one of their community art projects, a piano, which families took turns painting throughout the day. This, along with two other pianos, will be decorated by the public at multiple community events leading up to this year’s festival where they will be displayed throughout the event site with the hopes to encourage folks to sit down and try their hand at music.

The Mustang Outreach Program was founded to supplement the cultural arts program in local schools with world-class music performances, residencies and mentoring programs while also providing a stage for musically gifted students to perform their self-composed works.

You can check out highlights from the event in the player below!

Stay tuned to OBXentertainment.com for full coverage of the 4th Annual Mustang Music Festival, and be sure to check out our exclusive interview with festival founder Mike Dianna on Episode 25 of our original Outer Banks web series OBXE TV in the player below!