Doug Bradley and Nicholas Vince are two of the most charming British gentlemen you could ever hope to meet, and they are also two of the scariest figures ever to terrify movie audiences as the deformed demon-like Cenobites in Clive Barker’s 1987 landmark horror masterpiece Hellraiser, a testament to their talents and the lasting impact of the film on pop culture.

As Cenobite leader “Pinhead”, Bradley would reunite with Vince as “The Chatterer” in the 1988 sequel before Bradley would bring Hell to Wilmington, North Carolina to shoot Hellraiser III: Hell on Earth, which opened 21 years ago this week, on September 11, 1992.

The two actors and longtime friends were in Virginia Beach earlier this year for the third Blood at the Beach Horror Convention, where they recounted the making of these classics for a captive audience during an intimate Q&A panel, and OBXentertainment.com was there!

‘Hellraiser’ stars Nicholas Vince (Chatterer) and Doug Bradley (Pinhead) at Blood at the Beach III in Virginia Beach, VA, May 11, 2013.

In response to a fan’s question about how long it took for the actors to get into their extensive makeup, Bradley answered, “It was about five or six hours. It was a six-piece application early on that then became a two-piece. It sped it up, but not really too much. Standard application took about three or four hours.

“Before I got on the plane to go out to London to shoot (Hellraiser 4) Bloodline, Gary Tunnicliffe who was designing my makeup said ‘I think I’ve got this down to a two-hour application.’ I laughed cynically. The first day it took him five hours.”

Bradley went on to say that the record shortest time it ever took for Tunnicliffe to apply the Pinhead makeup during the Bloodline shoot was just under one and a half hours, a new record for which the effects master won a bet with Bradley for $20, which he had framed and hung in is bathroom.

“When we were in Romania making Deader and Hellworld,” recalled Bradley, “he decided he wanted to break his world record. He had one failed attempt, and then he did, he smashed it. He put the makeup on in 69 minutes.

“He was especially delighted he’d done it in an hour and five minutes and he had two t-shirts made; one for me saying ‘I was 69ed by Gary Tunnicliffe’ and one for himself saying ‘I 69ed Pinhead’. “

Asked for stories about Bradley, Vince smiled wide and replied, “One of my favorite stories is when we used to get there very early in the morning on the second movie, and one of my favorite visions is Doug standing on a chair with Geoff’s (Portass, makeup effects artist) filofax threatening to throw it out the top of a window.”

“It was either B6 or B12 vitamins that she (the nurse) gave me,” added Bradley, “and it hit me like speed. I went bananas. So what did Geoff do? He Duct taped me to the makeup chair. That’s the only way he was going to make me sit still.”

“We have a thing in the U.K. called Comic Relief where you buy a red nose, and there is a fabulous photo of Pinhead with the makeup with a red nose and a towel,” said Vince. “That’s my other favorite vision of Doug.”

“And I was naked behind the towel,” said Bradley, “but that’s another story.”

When asked for a story about Vince, Bradley joked “Oh, you want to know why I was naked behind the towel?”

“He had a set of false teeth that they put in with denture grip, which made Nic hyper-salivate.” he said. “Although his makeup went on very quickly, he was blind. So when we were called to set, Nic had to be guided and then pointed in the right direction, all the time chattering away like a trooper. So all my memories of Nic are of people guiding him around accompanied by this soundtrack of (mimics slurping saliva).”

Vince said he spoke to co-star Ashley Laurence recently. “She said she had always assumed I was doing it purposely to freak her out,” he said. 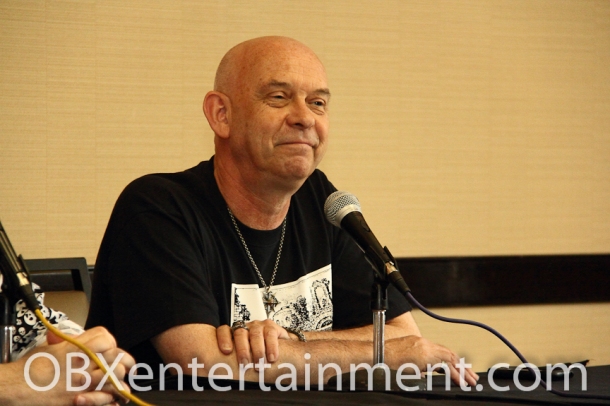 On author/director/Hellraiser creator Clive Barker, Bradley pointed out that both he and Barker attended the same high school as future Beatles leader John Lennon.

“I first met him when I was about 15,” remembers Bradley. “We were in high school together. Clive was already writing, directing, starring in, and drawing the posters for his own plays, which he was putting on at school with the permission of the Head Master. He would take over the whole school hall for an entire week to mount these productions. Same Head Master who about a decade earlier had given permission to another former pupil of the school to form a band, and I believe he went on to have quite a career in the music business. What was his name again? Lennon. That was Cory Bank High School.

“I always say he (the Head Master) laid his head on his pillow lightly, having played a significant role in helping to launch the careers of both John and Clive.”

“So it was going into rehearsals for the school play when I first met him (Barker),” said Bradley. “Later we started doing experimental theater in London. We had our own theater company that was kind of winding up in 1982. In that last year, I can remember on the way to a gig, Clive handing me some handwritten manuscripts saying ‘Have a look at this and tell me what you think. I’m trying to write short horror stories and see if I can make a bit of money at it’. That was the first time I read several stories that ended up in Books of Blood. So the making a bit of money thing worked.

“Then in 1985 we had a conversation and he said ‘I’m trying to get an independent British horror movie together and I think there’s a part in it that might be right for you.’

“For someone who creates such a total vision and knows every square inch of what he’s doing and why he’s doing it, he’s tremendously generous. He thinks on his feet, never short of a solution. John Lennon in fact said in one of his songs, ‘There are no problems, only solutions,’ and that applies to Clive in bucket loads. He can be a difficult SOB as well. I don’t think you get to be the kind of creative giant that Clive is and not have that be the case.

“Working with him has always been for me thrilling and exciting.”

Vince recalled of his first encounter with Barker, “I met Clive much later. We met at a party and I had no idea who he was. We started chatting and he just said, ‘Would you like to model for me?’ I still have the first picture that he did. I went on to model for him regularly. Then he eventually asked me act in some of his movies.

“He always listens to all of your ideas. He’s so great to work with.”

“As an actor you don’t want to feel like you’re just standing there with a dead face saying lines, which is exactly what he wanted me to do. What he was saying was that if you do that with that makeup on your face, by the time it gets to the screen the result will be devastating. Nobody will be able to read your emotion. It will be terrifying. But if you try to put too much in, it won’t be as powerful.”

Asked for his favorite of Pinhead’s many legendary one liners, Bradley said, “When I read the screenplay, the first line that I remember really grabbing hold of was ‘No tears please, it’s a waste of good suffering,’ and I wrote next to it ‘gag’ to remind myself that this guy was funny –not Freddy rock-and-roll funny, but funny with a dark undertone.”

On Hellraiser III, the sequel that brought Pinhead to North Carolina, Bradley says, “It was only really going into the third movie that I was aware of a certain weight of expectation on my shoulders from the fans.”

Of working in the Wilmington area, the actor told us later, “It was beautiful, and the people were just fantastic.” 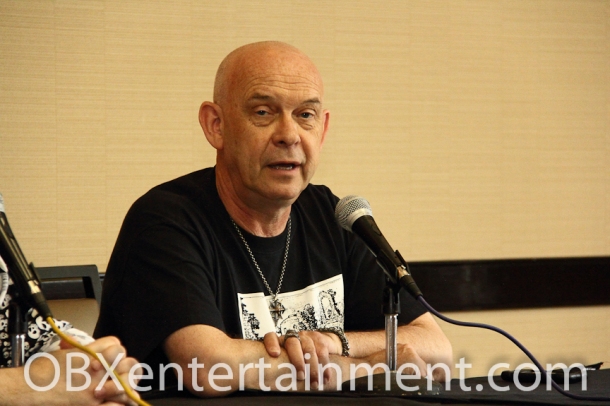 Vince recently published his first collection of original short stories in a book called What Monsters Do, and a second volume called Other People’s Darkness was released in June.

In all, Bradley played the iconic and eloquent Pinhead in eight Hellraiser films, ranking him among the greatest movie monster actors of all time.

[Click HERE for more of our coverage of the Blood at the Beach Horror Convention!]

CLICK HERE TO VIEW THE GALLERY AND PURCHASE PHOTOS!