The 109th anniversary of the Wright brothers’ first flight in Kill Devil Hills, North Carolina will celebrate man’s journey from the sands of these Outer Banks all the way to space.

This year’s first flight observance ceremony on Monday, Dec. 17 at Wright Brothers National Memorial in Kill Devil Hills begins at 9am with the annual First Flight Shrine induction, followed by a military and civillian aircraft flyover at 10:35am.

Read on for the official press release about this year’s Shrine inductee. 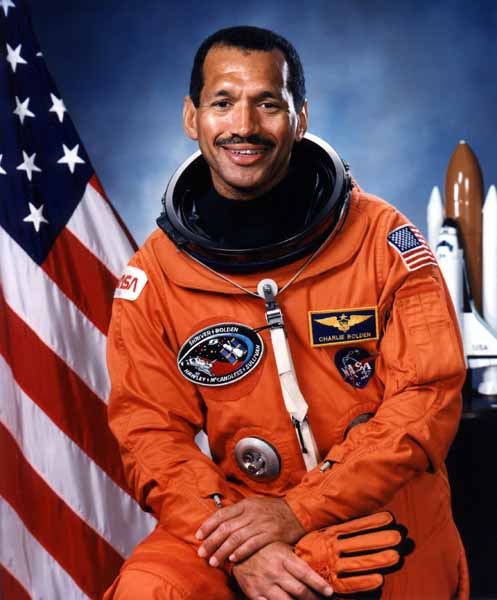 The First Flight Society announces NASA Administrator Charles Frank Bolden, Jr., a retired Major General (USMC) as its honoree to be inducted in the Paul E. Garber First Flight Shrine as a highlight of the 109th Celebration of Powered Flight at the Wright Brothers National Memorial in Kill Devil Hills, North Carolina on December 17, 2012.

Inductees in the Shrine are selected for outstanding accomplishments in manned flight and for their contributions to aviation. The Shrine is housed in the Visitor Center at Wright Brothers National Memorial. Bolden will join such outstanding notables as Former President George H. W. Bush, Neil Armstrong, Charles Lindbergh, John H. Glenn, Jr. and others.

Born in Columbia, SC, Bolden earned a Bachelor of Science degree in electrical science from the U.S. Naval Academy in 1968. He was commissioned as a second lieutenant in the Marine Corps and completed flight training as a Naval Aviator in 1970. He flew more than 100 combat missions in North and South Vietnam, Laos, and Cambodia from 1972-1973.

After returning to the United States he served in a variety of positions in the Marine Corps in California and earned a Master’s of Science degree in systems management from the University of Southern California in 1977. Following graduation, he was assigned to the Naval Test Pilot School in Patuxent River, MD. While working at the Naval Air Test Center’s Systems Engineering and Strike Aircraft Test Directories, he tested a variety of ground attack aircraft until his selection as an astronaut candidate in 1980.

His 34-year career in the Marine Corps included 14 years as a member of NASA’s Astronaut Office. He traveled to orbit four times aboard the space shuttle between 1986 and 1994. During his first mission on board the Space Shuttle Columbia in 1986, he participated in deployment of the SATCOM KU satellite and conducted experiments in astrophysics and materials processing. On his second mission in 1990, as pilot of the Space Shuttle Discovery, he and his crew successfully deployed the Hubble Space Telescope and conducted extensive scientific experimentation.

On his third mission, he commanded the Space Shuttle Atlantis on the first Space Laboratory. During this 9-day mission the crew operated the ATLAS-1, a system composed of 12 experiments which succeeded in making a vast amount of detailed measurements of the Earth’s atmospheric chemical and physical properties.

Immediately following the third mission, Bolden was appointed Assistant Deputy Administrator for the National Aeronautics and Space Administration, a Washington, DC post, which he held until assigned as commander of STS-60, the 1994 flight of a six member crew on the Space Shuttle Discovery. This landmark 8-day mission was the first joint US/Russian Space Shuttle mission, involving the participation of a Russian Cosmonaut as a mission specialist, a series of joint science activities, and carrying the Space Habitation Module-2 and Wake Shield Facility-01 into space.

Upon completion of his fourth mission, Bolden had logged more than 680 hours in space.

Bolden’s many military decorations include the Defense Superior Service Medal and the Distinguished Flying Cross. He was inducted into the U.S. Astronaut Hall of Fame in May 2006. He has received Honorary Doctorates from several distinguished universities.

Nominated by President Barack Obama and confirmed by the U. S. Senate, Bolden began his duties as the twelfth Administrator of the National Aeronautics and Space Administration on July 17, 2009. As Administrator he leads the NASA team and manages its resources to advance the agency’s missions and goals.