He was first sent to a reform school at age 9, and spent much of the next 20 years in correctional facilities, but it was a blessing in disguise. Coe received encouragement to begin writing songs from the legendary Screamin’ Jay Hawkins, with whom he had served time in prison.

After serving another prison term in 1967, Coe was released in 1969 and headed for Nashville, where he recorded his debut album, fittingly titled “Penitentiary Blues.”

According to CMT, publicity campaigns later claimed that Coe spent time on Death Row for killing a fellow inmate who had demanded oral sex. After receiving conflicting accounts from prison officials, a Rolling Stone magazine reporter questioned Coe about the alleged murder. His musical response was the song, “I’d Like to Kick the Shit Out of You.”

In 1974, Coe wrote Tanya Tucker’s number one single, “Would You Lay With Me (In a Field of Stone)?” and began calling himself “Davey Coe, the Mysterious Rhinestone Cowboy,” often performing in a Lone Ranger-styled mask and driving a hearse or sometimes a Harley-Davidson motorcycle onto the stage .

His 1978 album Human Emotions was about his divorce, with one side called the “Happy Side” and the other, “Su-i-side.”

He was joined by other “outlaw country” legends – including Guy Clark, Townes Van Zandt, Rodney Crowell, Steve Young, Steve Earle, and The Charlie Daniels Band – in the 1976 documentary “Heartworn Highways” , released theatrically in 1981. 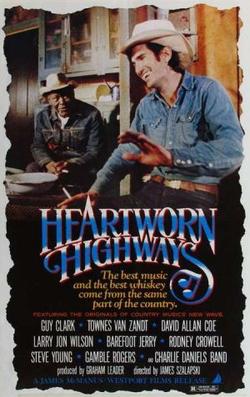 Coe wrote perhaps his most recognizable song for his 1978 release Family Album, but  it became a monster hit as covered that same year by Johnny Paycheck. In the decades since, however, the track has become synonymous with it’s infamous writer.

Watch Coe perform his classic hit “Take This Job and Shove It” using the player below!

The song was so huge, it was actually made into a feature film in 1981, also called “Take This Job and Shove It,” starring Robert Hays (Airplane) and Barbara Hershey (Black Swan). Both Coe and Paycheck appeared in the film version, as well. You can view a vintage TV ad for the movie below.

While Coe lived in Key West in the late 1970s, he independently released is first comedy album, Nothing Sacred.

Jimmy Buffett accused Coe of plagiarizing the melody of “Divers Do It Deeper” from Buffett’s “Changes in Latitudes, Changes in Attitudes,” stating “I would have sued him, but I didn’t want to give Coe the pleasure of having his name in the paper.”

In response to the success of Buffett’s song, Coe wrote a song insulting Buffett, and it appeared on Nothing Sacred. The album was released by mail order in 1978, through the back pages of the biker magazine Easyriders. Coe’s 1979 album Spectrum VII contained a note stating “Jimmy Buffett doesn’t live in Key West anymore,” a lyric from a song from Nothing Sacred.

In 1982, Coe put out another independent release entitled Underground Album, which was even more controversial and resulted in Coe being accused of racism. Coe reissued his independent albums on CD in 1990, as well as the compilation 18 X-Rated Hits.

“The Ride” recounts a drifter’s encounter with the ghost of country music legend Hank Williams. It spent 19 weeks on the charts.

In the last 30 years, Coe has toured the world and performed thousands of concerts for his legion of loyal fans, proudly living up his iconic “outlaw” image.

In 2008, he was arrested  for “Disorderly Conduct” and “Interference with Official Acts.” The charges were dropped later that year, but Coe shot back in 2010 when he took out his own lawsuit against numerous parties involved for “False Arrest”, “Assault”, “Malicious Persecution”, and “Intentional Infliction of Emotional Distress.”

In 2000, Coe toured as the opening act for Kid Rock and later wrote a song for him called “Single Father,” which appeared on Rock’s 2003 self-titled album. The track was released as a single and peaked at #50 on the Billboard Country Singles chart. (Hear it below!)  Kid Rock also often covers Coe’s 1982 song “One More Time” in concert.

After metal kings Pantera disbanded in 2001, three of it’s original members, including the late legendary guitarist Darrell “Dimebag” Abbott, recorded an album sporadically between 1999 and 2003 with Coe called Rebel Meets Rebel. It was released in 2006, two years after Dimebag Darrell’s murder. Allmusic described it as a “groundbreaking” country metal album.

Be there early this Friday to get one of the first “OBXE” logo stickers while supplies last!