Netflix’s ‘Outer Banks’ is a Fun and Entertaining Fantasy [Review]

Netflix’s new young adult drama series Outer Banks, which was filmed in Charleston County, South Carolina and set locally, became a massive hit for the streaming network almost immediately upon premiering in April, and while it may not be an exactly accurate portrait of the real Outer Banks, it is an undeniably well-made, fun, and entertaining show that actually gets more right about the area than it gets wrong.

I’ve seen plenty of locals complain and even state that they refuse to watch it because it was not in fact filmed on the actual Outer Banks, but that’s as ridiculous as not watching a Star Wars movie because it wasn’t actually filmed in space. Another Netflix hit, Ozark is not filmed in the Ozarks of Missouri where it takes place but in Georgia. A personal favorite of mine, The Crow takes place in Detroit and the city is a pretty big part of the story, but it was filmed entirely in Wilmington, North Carolina.

There’s also the 2019 film The Peanut Butter Falcon, which too is set on the Outer Banks and has proven to be quite popular among local residents, and yet it was filmed entirely in Georgia.

I could go on and list hundreds more, but this is simply how it works more often than not, and the fact that the actual Outer Banks has absolutely no film industry infrastructure in place alone means that it was never going to film here under any circumstances anyway, though the show’s creators, Raeford, North Carolina native twins Jonas and Josh Pate, did at one point hope to shoot in Wilmington.

And then there’s Nights in Rodanthe, which did film a few exterior scenes in the actual village of Rodanthe, but still featured scenes of Corolla’s wild horses running around down on Hatteras Island, which is obviously not a reflection of reality.

The bottom line is that Outer Banks, like everything else I just mentioned, is a work of art telling a story that is fiction, so the idea of boycotting it because it’s not really filmed where its story takes place is, at the very least, like judging a book by its cover, and more than that, it’s unnecessarily depriving yourself of a quality series that does pay loving and respectful tribute to the actual Outer Banks. It’s also kind of cool to see how “outsiders” like the Pate brothers, who undoubtedly visited the area on vacations in their own youth, view the Outer Banks, as a land of hidden treasures and rebelliously cool local outcasts, in an island community literally separated from the rest of the world and ultimately driven by the almighty dollar.

At its heart, the series is a coming of age story centered on a group of teen friends in “Kildare County.”

Chase Stokes stars as Outer Banks local John B., and aside from the fact he looks far older than the teenager he plays (and in fact the actor was 26 in real life during filming), he is a charismatic and charming lead that the audience can easily get behind. We learn early on that John B.’s mom left when he was very young, and his charter fisherman dad went missing at sea about six months earlier.

Rudy Pankow and Jonathan Daviss play John B.’s best friends, J.J. and Pope, respectively. It’s hinted that J.J. has suffered physical and certainly mental abuse from his father, while Pope is the one member of the group with is sights set firmly on college and a career to follow.

Kernersville, North Carolina native Madison Bailey (Black Lightning, Creepshow) plays Kiara, known to her friends as “Ki,” the tough, grounded cool girl that all three of the guys are in love with from the moment we meet them, though they know better than to cross lines out of the friend zone and risk driving her out of their tight-knit circle. 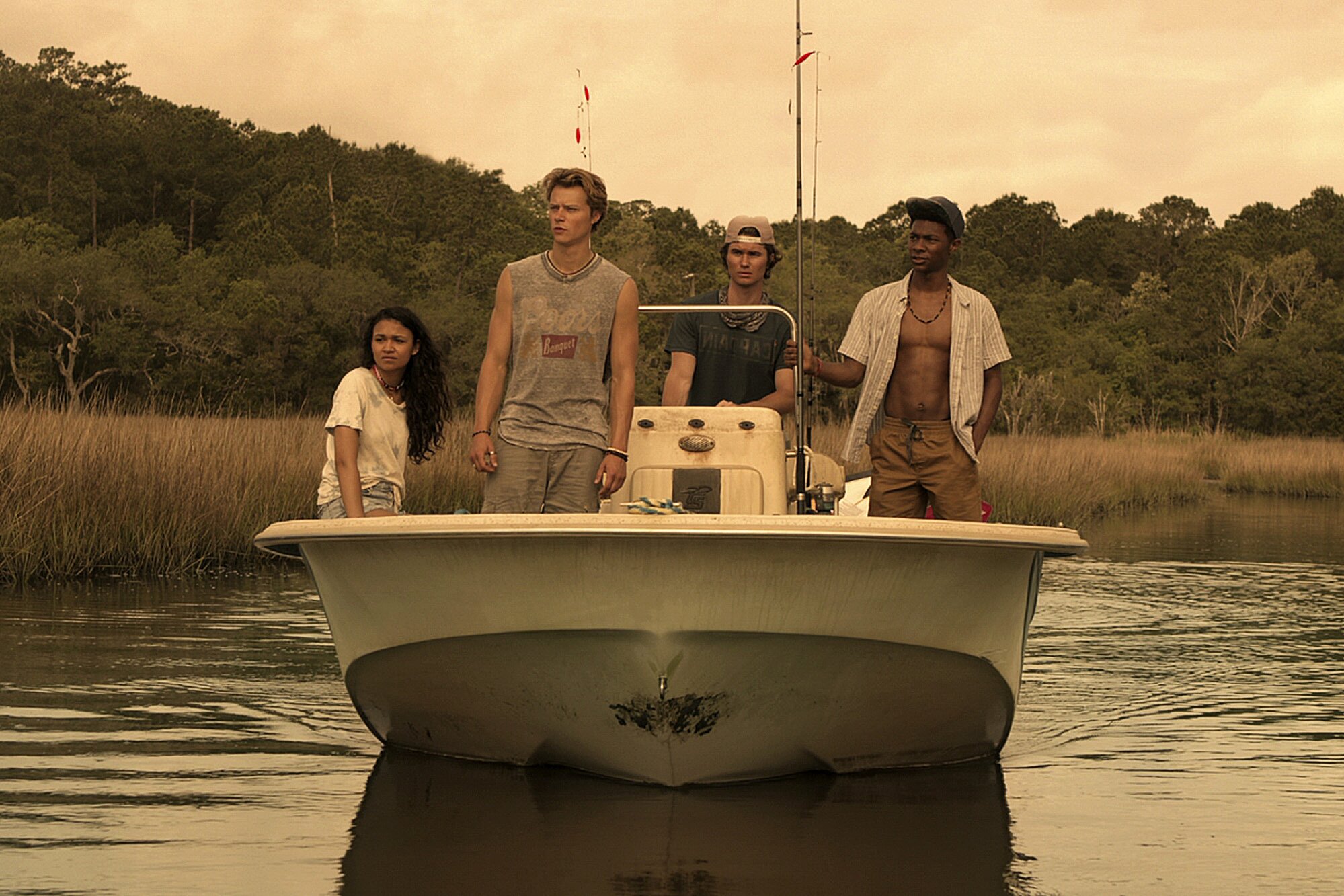 Madelyn Cline plays Sarah Cameron, the rich girl from the other side of the island. Her dad, Ward, played by Charles Esten, is John B.’s boss, her brother, Rafe, played Drew Starkey, is the area drug dealer, and her boyfriend, Topper, played by Austin North, is the snobby jerk who looks down on John B. and his pals. But Sarah finds herself attracted to shaggy John B., and he may just feel the same way about her. It’s a Romeo and Juliet story made on the Outer Banks.

Adina Porter, who previously starred in another series set in a fictional version of the Outer Banks in American Horror Story: Roanoke (which was also not filmed locally though it took place on Roanoke Island), is keeping a keen eye on John B. and his friends, even while she suspects things are not all what they seem in the mysterious disappearance of John B.’s father.

The show has its own lingo, as the scrappy locals refer to themselves as “Pogues’ and Sarah and the other non-resident property owners who come to stay just for the summer as “Kooks,” and while those nicknames are fiction, the resentment many full-time residents (most of which don’t own the property where they live) feel toward the perceived-to-be-richer property owners, whose large houses are mostly rented during the summer and used by the owners during the off season, is real.

The most cringe-worthy moment in the entire series is one line of dialogue in which a character refers to tourists as “tourons,” a term I despise, but it is also a 100% honest and true depiction of the area, as far too many locals do use the term far too regularly, not to mention unfairly. (The term insinuates that all visitors are stupid, which is certainly untrue, and after living here for more than two decades, I’ve encountered more stupid locals than tourists, but that’s another story for another article.)

Folly Beach, South Carolina’s historic Morris Island Lighthouse serves as the show’s fictional “Redfield Lighthouse,” a special spot for John B. that slightly resembles the Currituck Beach Lighthouse in Corolla, an amalgamation of the many real lighthouses along the Outer Banks’ landscape.

After Hurricane Agatha passes, it’s a clear and sunny post-storm day, as there are mattresses soaked from flooding thrown out by the road to be taken with the garbage, debris and downed trees to clean up, and everyone has property damage to repair, much as it is after a hurricane passes off the coast of the real Outer Banks.

Boat wrecks come into play, yet another nod to the very real Graveyard of the Atlantic, the resting place of countless shipwrecks just off the coast of the barrier islands we call the Outer Banks, and the treasure hunt that ensues recalls the real pirate history of the area while also serving as a bit of an homage to The Goonies.

The 10-episode first season ends with plenty of potential to follow up with in a second season, which has not yet been officially announced by Netflix, but is all but assured considering the huge popularity of the series.

When the Outer Banks topped a list of the most Googled vacation destinations during the COVID-19 pandemic quarantine, it was undoubtedly due to millions of fans wanting to learn more about the place that the show is based on, translating to a new generation of adventure seekers and pop culture aficionados interested in visiting the area.

Whether you live here, love to come here, or hope to visit one day, this series is a welcome escape worth taking.