OBXentertainment.com is excited to present the first ever OUTER BANKS HALLOWEEN PARADE OF COSTUMES, a free family-friendly event, coming to Kelly’s in Nags Head on Sunday, October 26!

The mission of this inaugural Parade of Costumes is to provide a safe and positive celebration of Halloween and its traditions, for Outer Banks locals and visitors alike, and Halloween lovers worldwide, with live entertainment and loads of fun for adults and kids of all ages.

Registration for the parade begins at 2pm on Sunday, Oct. 26, with a pre-parade Halloween Festival featuring live music by Outer Banks singer/songwriter Jonny Waters, as well as a special appearance by Queen Elsa from the Disney movie Frozen, who will be available for autographs and photos.

Trick-or-treat stations and activities will be setup outside in the Kelly’s lawn, featuring special guests with seasonal treats to hand out, plus OBXjetpak and the “Haunted Hearse” on display, and OBX Entertainment will provide registered parade entries with a complimentary trick-or-treat bag to keep all their goodies in.

Meet Elsa from ‘Frozen’ at the Outer Banks Halloween Parade of Costumes on Sunday, October 26, 2014 at Kelly’s in Nags Head! (photo by Matt Artz for OBXentertainment.com)

For the horror crowd, the actors from Wanchese Woods Haunted Trail and The Lost Colony’s PsychoPath Haunted Island will be on hand to offer an up close look at some of their creatures and explain what it takes to scare people.

Michael Myers, the masked icon of director John Carpenter’s 1978 classic film Halloween, will also be lurking around and available for photos.

Food and beverages will be for sale inside Kelly’s, as well as NFL football on TV and professional portraits.

The short walking parade will begin at 3pm, running east along the north side of W. Oak Knoll, north on the paved sidewalk along the west side of US 158, and then west along the south side of W. Carolinian Circle, concluding back in the Kelly’s backyard.

Admission to this rain or shine event is free for anyone wearing a Halloween costume.

You can find additional information about the Outer Banks Halloween Parade of Costumes, including a full list of costume contest prizes, online at obxHalloween.com.

Stay tuned to OBXentertainment.com for more announcements this week, as we countdown the days until the Outer Banks Halloween Parade of Costumes.

Watch and share the Parade promo video in the player below! 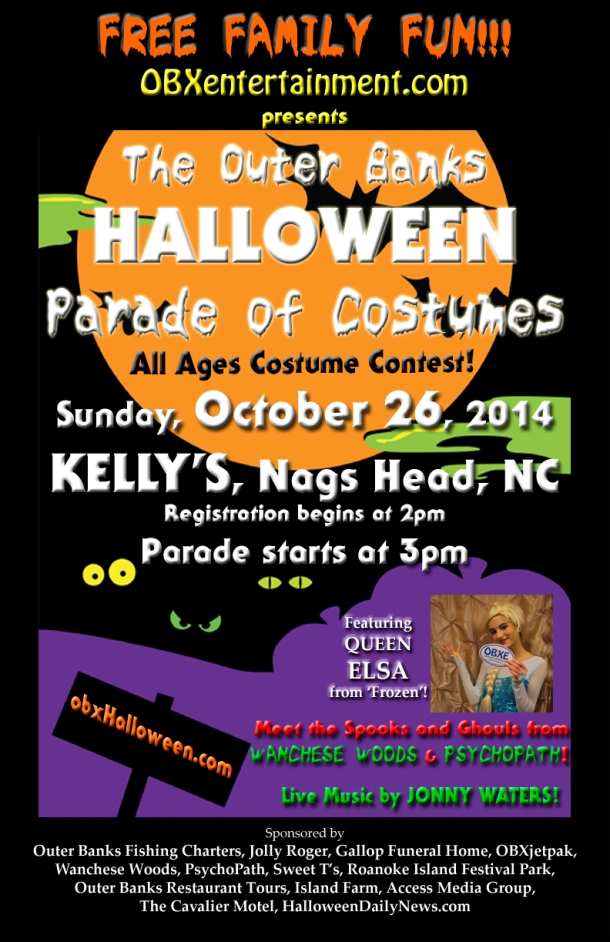