[Movie Review] 'Dawn of the Apes' is Serious Monkey Business

Dawn of the Planet of the Apes is a great sequel to a pretty good prequel to one of the all-time classic sci-fi mindbenders ever put on film.

I am a huge fan of the 1968 original Planet of the Apes and its awesome twist ending courtesy of The Twilight Zone creator Rod Serling, and Tim Burton’s 2001 remake, while initially disappiointing, has actually grown on me over the years, but I have not seen all four of the original sequels, and I admit I had low expectations for the 2011 prequel Rise of the Planet of the Apes, though it turned out much better than anticipated.

This new sequel to Rise, however, is another story entirely, as the script is literally flipped from Rise‘s human-based story of the apes becoming smart enough to take over, to this riveting apes-based story of the humans now desperate enough to invade Ceaser’s small but fledgling community, despite his clearly worded warning to stay away or face war.

Ceaser leads the ‘Dawn of the Planet of the Apes’.

As portrayed by the greatest motion capture performance artist in the business, Andy Serkis (who played Gollum in The Hobbit and the biggest ape of all in King Kong) is outstanding as the ape leader Ceaser, who was the first to speak the word “No” in Rise of the Planet of the Apes.

Ceaser is quite simply the most fully realized and believable digital character ever put on film. He is a marvel to watch, as are all the apes, including the terrifying Koba, played with same motion capture technology by Toby Kebbell.

When Koba rebels against Ceaser out of distrust of the humans, we feel his plight as justified from his point of view. Koba’s story arch gives the film its biggest punch, and when the apes eventually attack, we feel bad for both sides loosing everything they have all built.

Director Matt Reeves graciously lets us inside the mindsets of both communities, intimately and effectively making viewers sympathetic to both sides of the brewing conflict, as we rightfully should be in times of war.

The apes are armed in ‘Dawn’.

The human performances are outstanding as well, with a totured and vengeance-minded Gary Oldman (The Dark Knight, Dracula) leading what’s left of the humans in what used to be San Francisco, prior the ape take over at the end of Rise.

Jason Clarke (Zero Dark Thirty) is great as the widowed dad attempting to make peace with Ceasar, convincing the ape to let him and his crew repair a damaged dam that could restore power to the city.

The talented Keri Russell (August Rush) is always a joy to watch, but she’s used too little as Clarke’s sympathetic new love interest, while Kodi Smit-McPhee (The Road, Let Me In) shows the well worn depth of a kid who has seen horrors he should never have to witness as Clarke’s wideyed son. 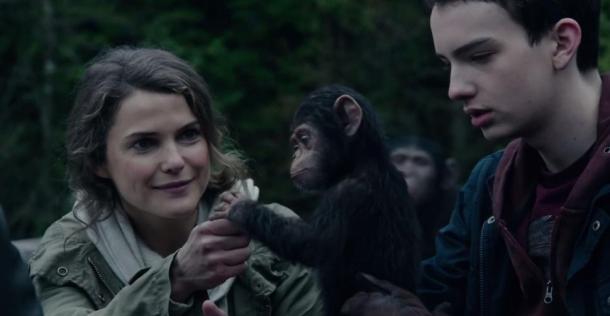 Keri Russell and Kodi Smit-McPhee make a new friend in ‘Dawn of the Planet of the Apes’.

Dawn honors the Planet of the Apes legacy, while providing the best sequel I’ve seen this year, an emotional and even poignant exploration into what gives us our humanity, what could threaten to take it away, and how hard we must fight to save it, all told through the hardned eyes a new kind of movie character.

A perfect marriage of human acting and computer technology, more than a CGI spectacle, the ape leader Ceasar is this summer’s most interesting hero.

Much better than you’re expecting and far more visually pleasing than ever possible before, the newest Apes movie is the Dawn of new age of special effects-heavy filmmaking, where human heart and soul shines through even the most impressive computer generated imagery.

Dawn of the Planet of the Apes (rated PG13) is now playing at R/C KDH Movies 10 in Kill Devil Hills, and at the Pioneer Theatre in Manteo the week of Aug. 22-28.