OBXentertainment.com caught up with Elina Madison at the recent “Blood at the Beach” Horror Convention in Virginia Beach, VA and talked to the busy actress about her various upcoming projects and her first impression of the Tidewater region.

Visiting Virginia Beach for the first time, Madison (pictured above with her new OBXentertainment.com decal) told us she arrived after dark on Friday and was surprised to wake up to such an impressive sunrise view of the beach on Saturday morning.

Madison said she was equally impressed with the convention itself, having attended many similar events over the last year.

“I would’ve never known it was a new convention,” she said, “because they had a really good crowd, and the fans were much more personable. I thought they did a really good job.”

Elina said the best part of making convention appearances for her is the personal interaction with fans.

“When you’re working on a movie,” she said, “you don’t get any interaction whatsoever, so when the movie’s finished and people finally see it, they come up to you at these conventions and talk to you about it. They’re excited about it and have their opinions about it. And they’re so supportive. It’s my favorite part.”

Elina was at the convention for a screening of her new film Huff, a modern retelling of the Three Little Pigs tale, along with her co-star Charlie O’Connell and director Paul Morrell.

“It’s a hard movie,” she explained, “in that Charlie’s character is just so horrible. He’s just absolutely terrible, and my character, his wife, is no better because she’s such a horrible mom. She’s got these three daughters that obviously need protecting by her, and she’s just so self-absorbed and clueless that she’s not going to do what she needs. But everybody liked it, because the acting’s good, the story is good and it’s easy to follow. You really want to see what happens, and hopefully in the end Huff gets his.

“It was really intense, because I play this mom who’s doing everything wrong with her children, and that was a hard place to go. I’m a mom in real life, I have a six year old daughter, and I couldn’t even imagine being in denial the things that are going on in the movie and the stuff that Huff is up to. It was definitely a challenge, but it was great. I really enjoyed working on the film. We had a great cast and a really fun crew.”

You can watch Elina in a trailer for Huff using the player below!

Madison will next be seen as the ultimate vampire bride in a modern retelling of Dracula, which will be released in January.

“It’s a different take on the classic Dracula,” Elina said. “I play his wife Francine. You don’t know until the end if I’m a good wife or a bad wife. It’s kind of an alternate reality and goes along with the theme that things are not always what they seem. Everyone has their different perception of what’s going on, and the truth is somewhere in the middle.”

Just prior to our interview, Elina’s horror spoof Halloween Party was released on DVD in October.

“It’s all about looking for love in all the wrong places,” she said. “Everything that could possibly go wrong at the party does. I play ‘Cavegirl’, and yes I’m dressed as a cavegirl throughout the entire movie.” 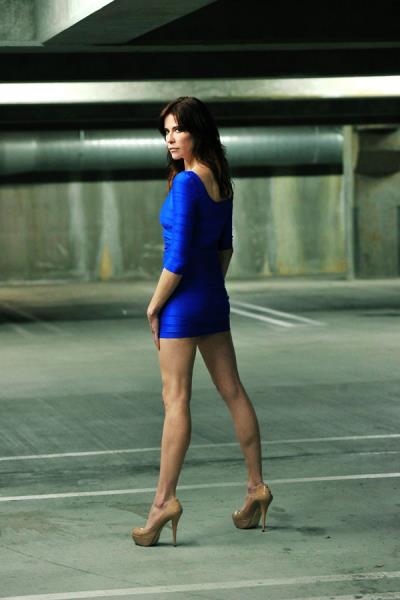 Elina also gave us some exclusive details on her most recently completed project, the thriller Black Tape.

“It’s along the lines of Paranormal Activity or The Blair Witch Project,” she said. “It’s a psychological thriller until the very end and there is a huge twist that is just …the only word I can think of is gnarly, and I don’t even use that word.

Black Tape is expected to premiere in 2013.

More than just a horror “scream queen”, Elina showed off her comedic skills as the title character in the superhero spoof Minty the Assassin, which was also released earlier this year.

“I get my special powers from mint chocolate,” she said. “The whole thing is based on a cartoon. I have to save my boss, who’s been kidnapped, and I have to overcome each one of these crazy characters to finally save him. It was a really fun movie to shoot. I had to train eight weeks to physically be able to handle the role. Hopefully there will be a Minty 2.”

You can check out Elina in the trailer for Minty The Assassin in the player below!

You can also see Elina flexing her diversity (and singing voice) on television currently in the new Greenlight Financial commercial, which started running after Thanksgiving and you can watch in the player below!

“I’ve done a lot of horror films and I love the genre,” Elina told of us her future plans, “but I feel I’m pretty diverse. I’ve done guest work on TV and ensemble character pieces that are just really about a day in the life of real people, and honestly I just like to play many different roles.

“I think it’s really fun to explore different types of characters, and with horror, you’re dealing with all these crazy circumstances. I love that, but I also love playing the mom or the socialite, or something on the comedic side. I feel I can cover all the bases, and I’m really happy about that.”

Look for Elina Madison currently starring in Huff, and next year in Dracula and Black Tape.

Click here for links to all of our stories and photo galleries from the Blood at the Beach (BATB 2) Convention!